So I started brewing my own kombucha. This post isn't really a tutorial, since this is only my first brew, but I thought I would document the process (mainly for myself, to look back on later). I think after a few more brews, I'll make a tutorial.
The kit I got is from The Kombucha Shop and it is amazing. After the initial cost, the cost of a gallon brew is about $1.50. Compare that to $4-$5 per 16 oz at a grocery store. I also got the custom heating wrap from the shop. In the future, I have my own loose leaf black tea that I'll use, and I'll probably buy the organic cane sugar from Trader Joe's or Whole Foods.

For various reasons, I've always been keen on adding probiotics to my diet. In high school, I got it from yogurt. In college, it was too hard to maintain any kind of food regimen, so I stopped worrying about it (which is also when I momentarily stopped being a vegetarian, after 7 years). When I started grad school, I started using a probiotic supplement. I really hated taking so many vitamins every single day, so I stopped taking them over time. I had been meaning to add probiotics back into my diet, but I never got around to it until my hand was forced by ear infection antibiotics. I couldn't go back to yogurt (I recently went dairy-free), so I tried kombucha because that's all any of my fellow yogis talk about.

Yes, it is an acquired taste. But yes, it is amazing after you acquire that taste. I started drinking a few bottles a week, refilling my bottles at kombucha tap stations at local grocery stores. In January, Jeffrey told me about a lady he saw on Shark Tank selling her own, homemade brew-at-home kombucha kits (he was really impressed by her business, apparently she was the most put-together businessman/woman he had ever seen on Shark Tank), and that's the moment I realized I wanted to be a homebrewer of kombucha! I ordered her kit, and started brewing. I decided to document the process, because it's neat and I'm quite proud of my work so far.

I made sweet tea with the ingredients from the kit. Half oolong, half ceylon, with organic cane sugar. The sugar is for the bacteria, so only about 8 grams will remain per 16 ounces at the end of fermentation. 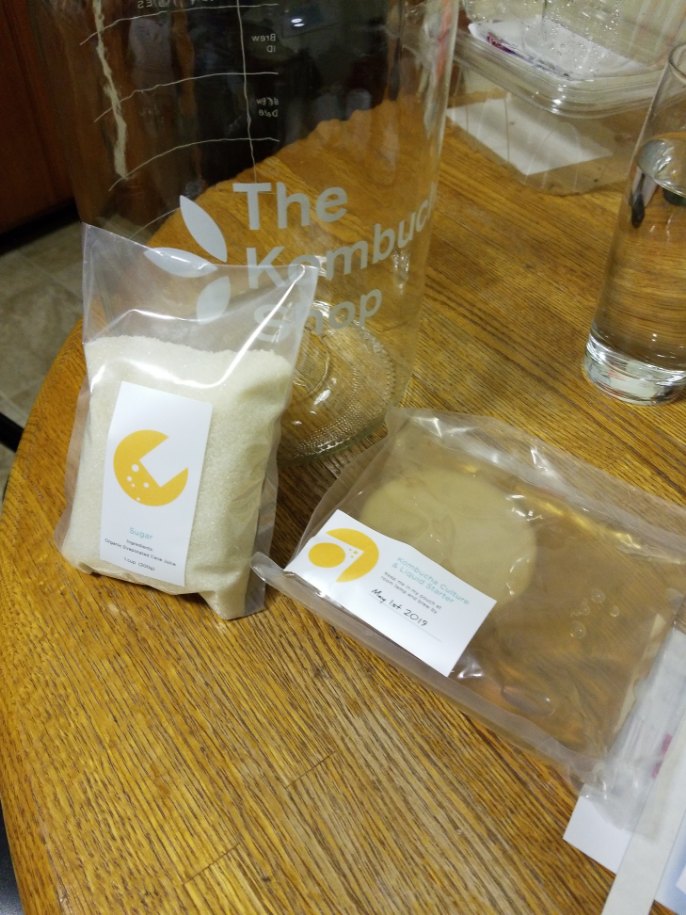 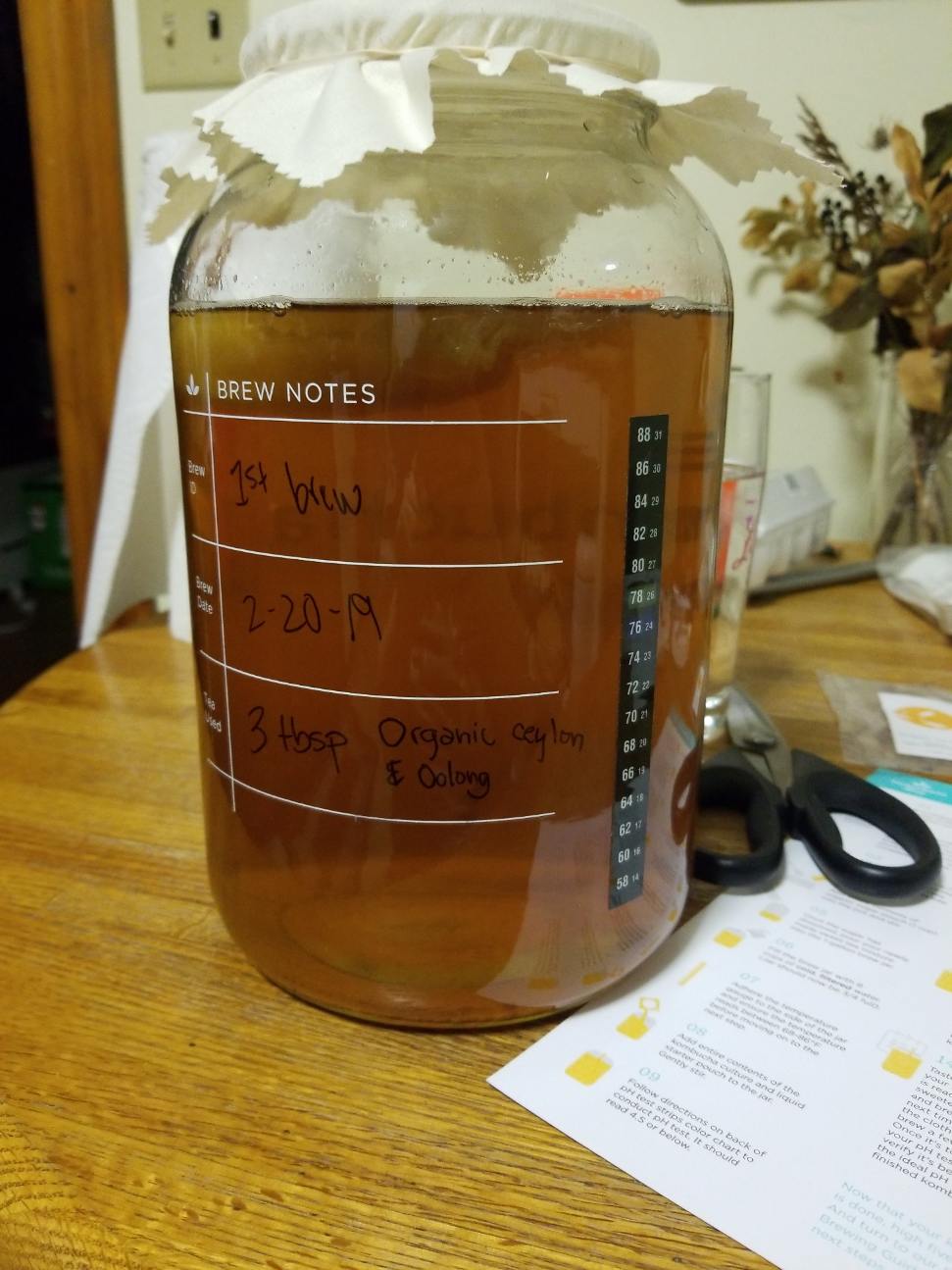 First day of the fermentation, just sweet tea and scoby. 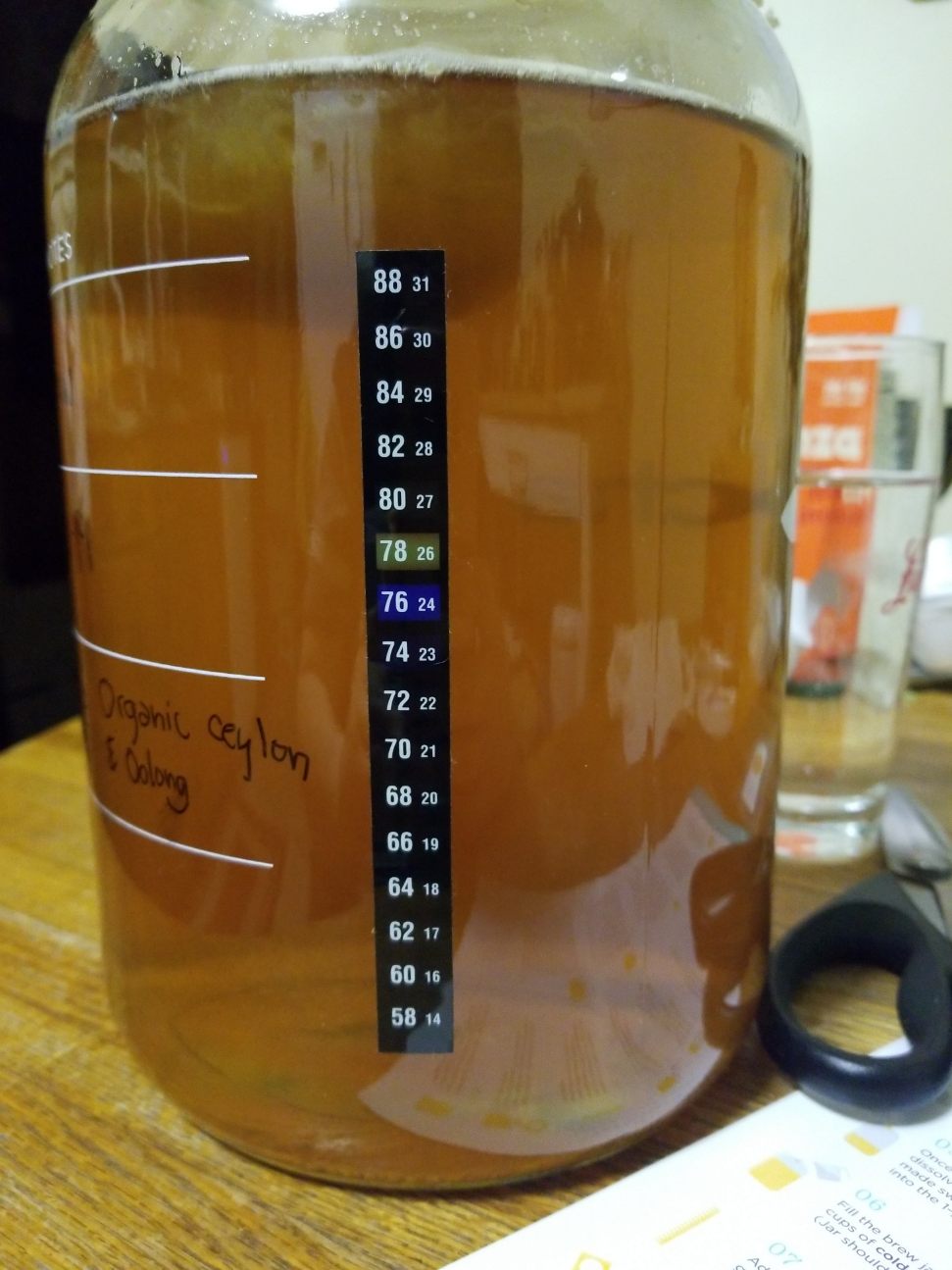 The brew was initially warm because of the hot tea, but I had to put on a custom kombucha heating wrap the next day to keep it warm.

My kombucha sat in my room, undisturbed at 76 F, for 7 days. It's important to keep in the high 70s; too cold and it will grow mold, too warm and the yeasts will overpopulate. You can see the yeast in the middle of the jar (the stringy-looking stuff), and the new culture forming at the top. The yellow circle is the starter scoby and the clear, white, and orange layer on top is my new culture. It looks like there are gaps or holes in the culture from the pictures, but actually the whole top of the liquid is a solid, gel-like culture, some of it is just transparent. I took off the cloth for the first time and wow! did it smell amazing. I tested the pH, which should be between 2.5 and 3.5 for kombucha, and gave it a taste test. It's still too sweet for my liking, so I'm letting it ferment for a few more days. 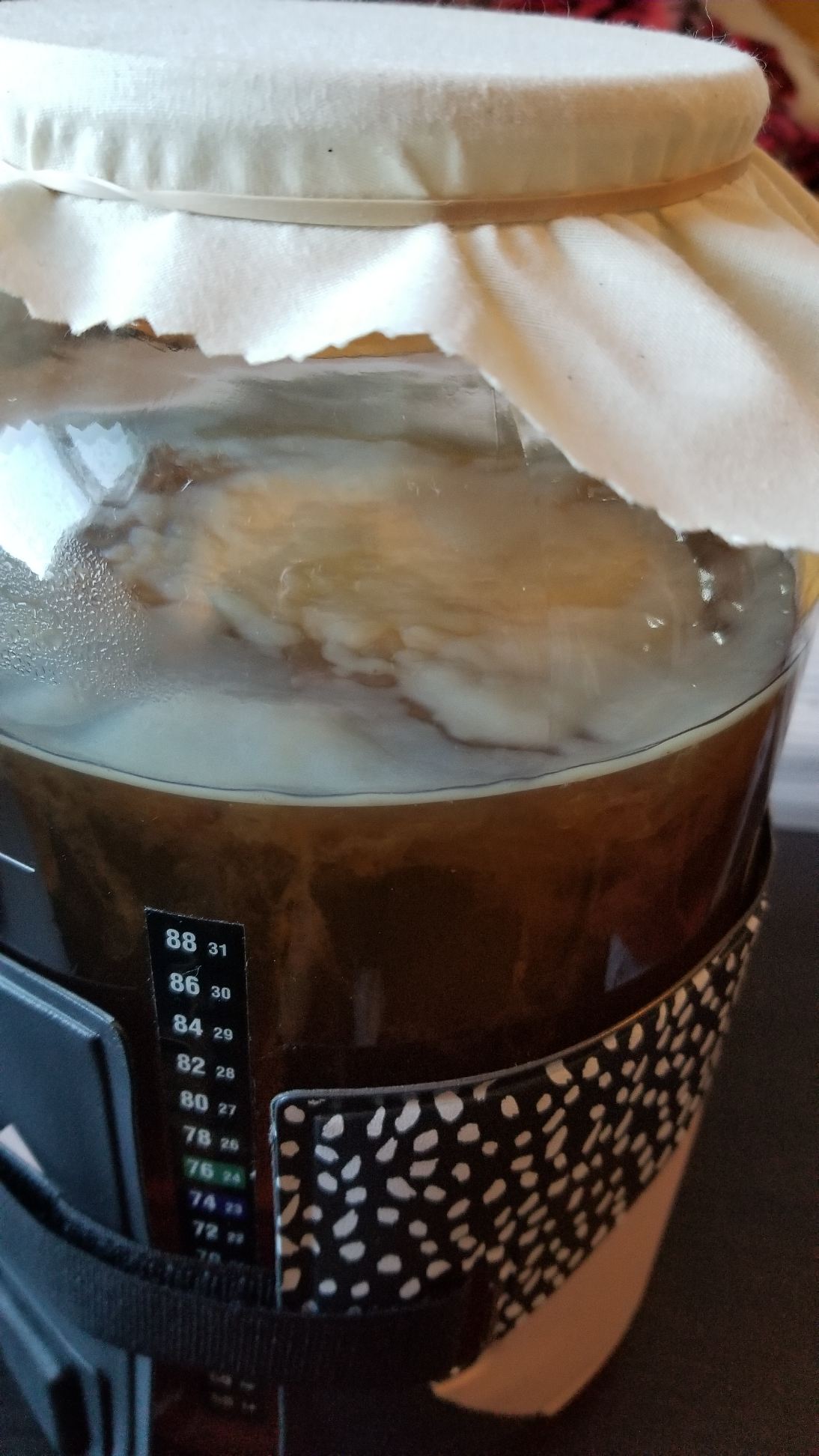 Scoby on day 6 of brewing. 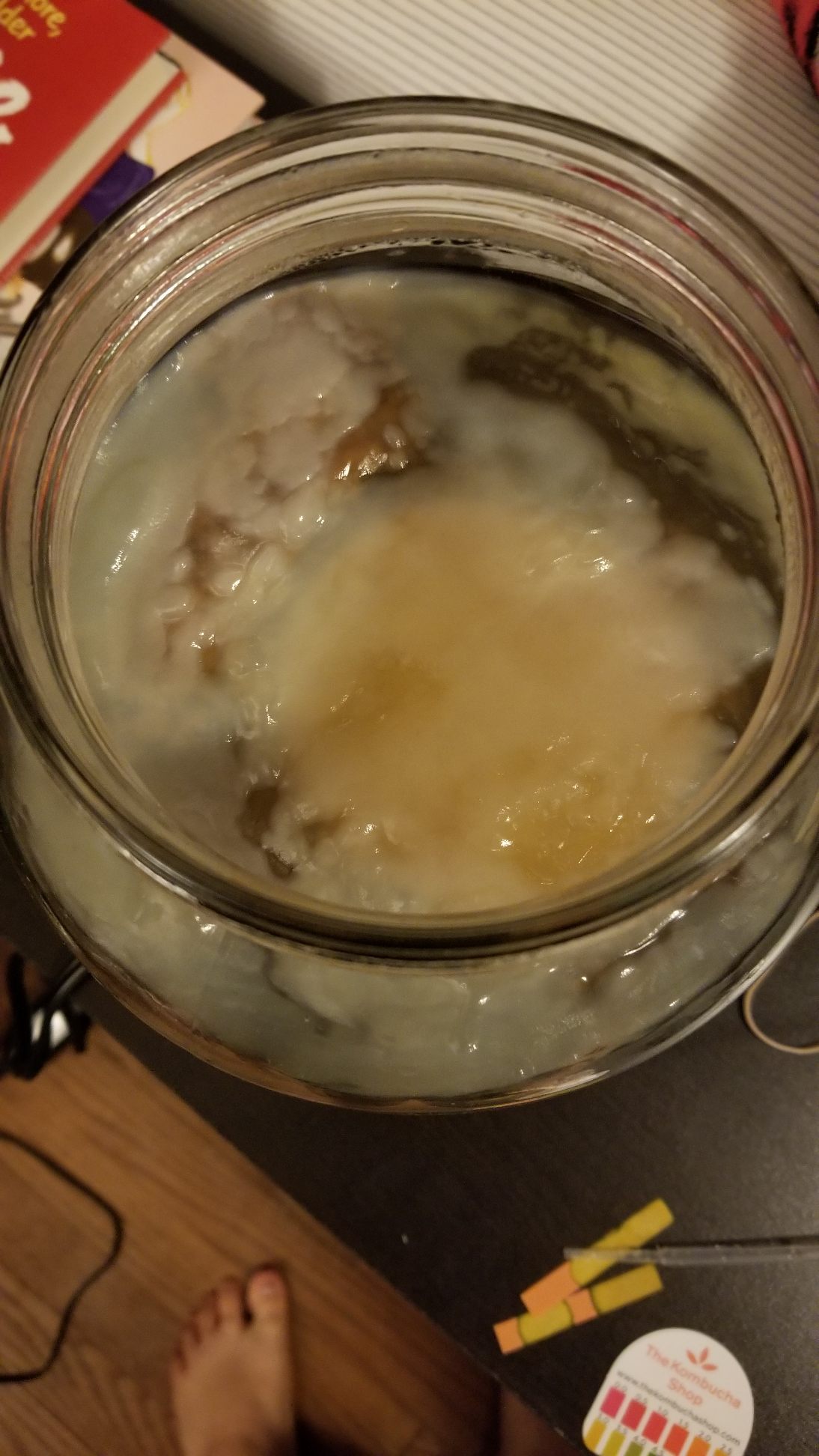 Scoby on day 7 of brewing. 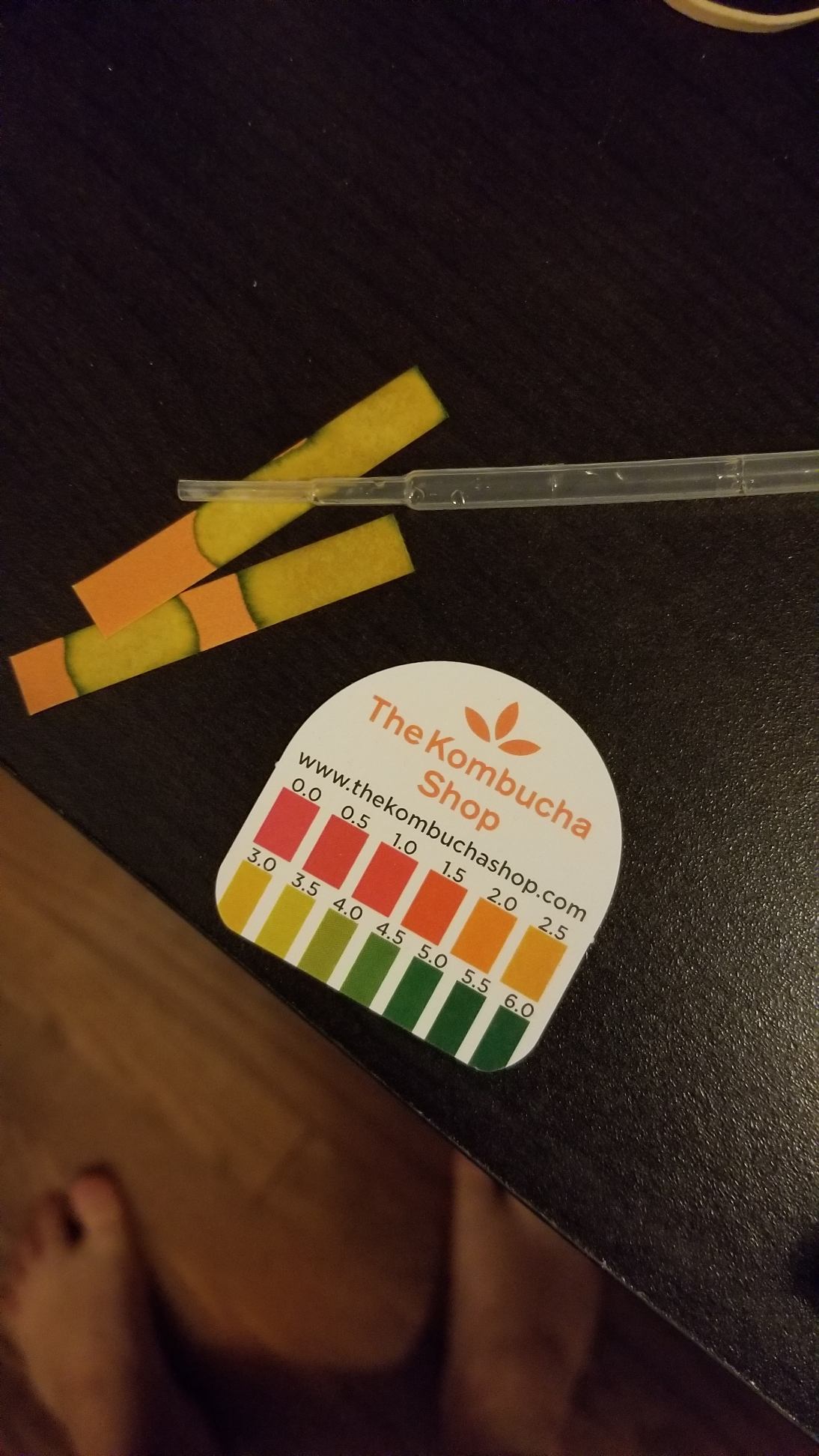 I've been testing the pH and taste of the kombucha every day since day 7, waiting for it to be tart enough for my liking, and to ensure that the pH stays in a good range. If you let it ferment for too long, it'll become straight vinegar. Today is the day! The pH is good and the booch is plenty tart, so I declared the first fermentation done. I bottled up the kombucha with some fresh fruit and spices and started the second fermentation. I removed the cultures and left some kombucha behind to become the starter liquid for the next batch, but the rest was bottled. 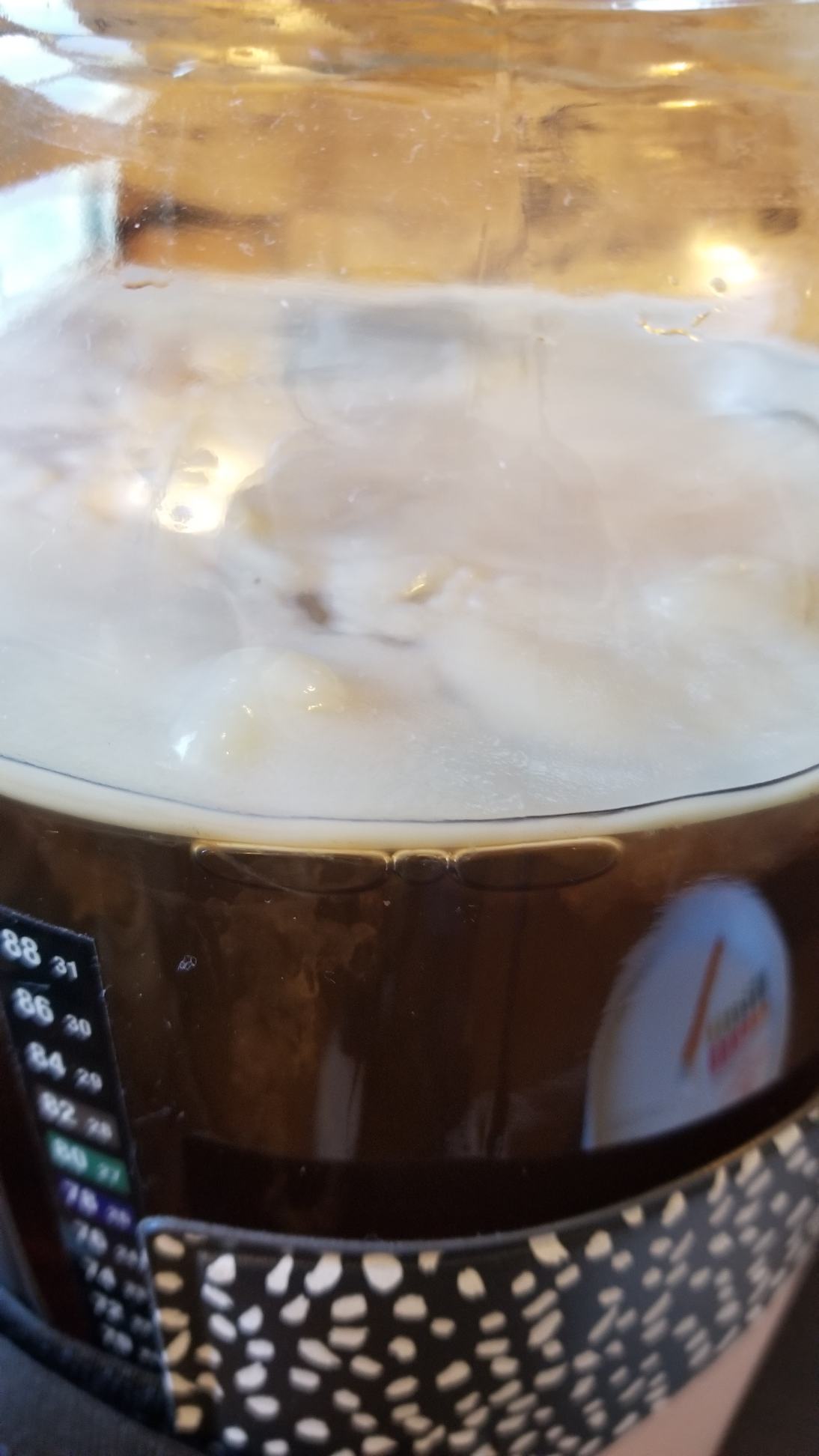 The new culture on day 11 is about a quarter of an inch thick. 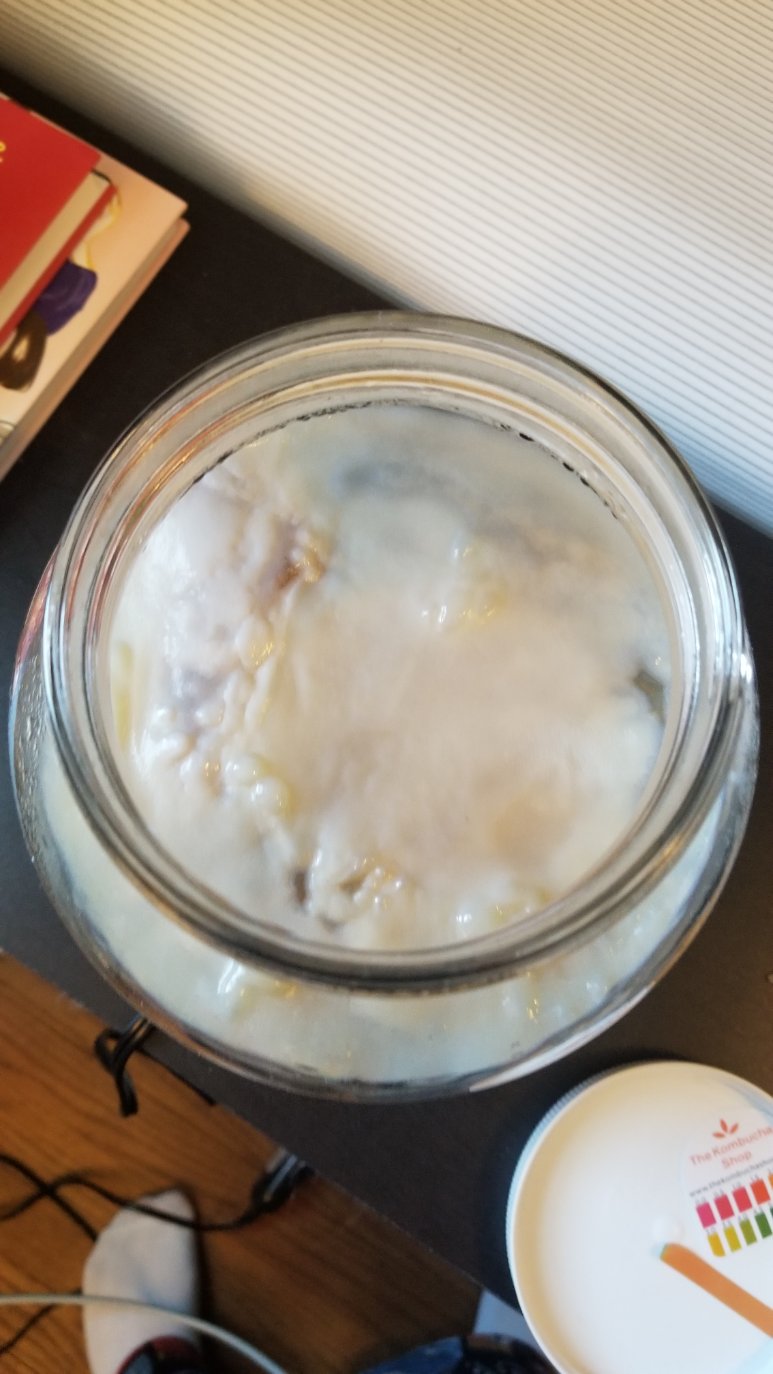 The new scoby grew a lot since day 7- now the whole top is white and yellow! 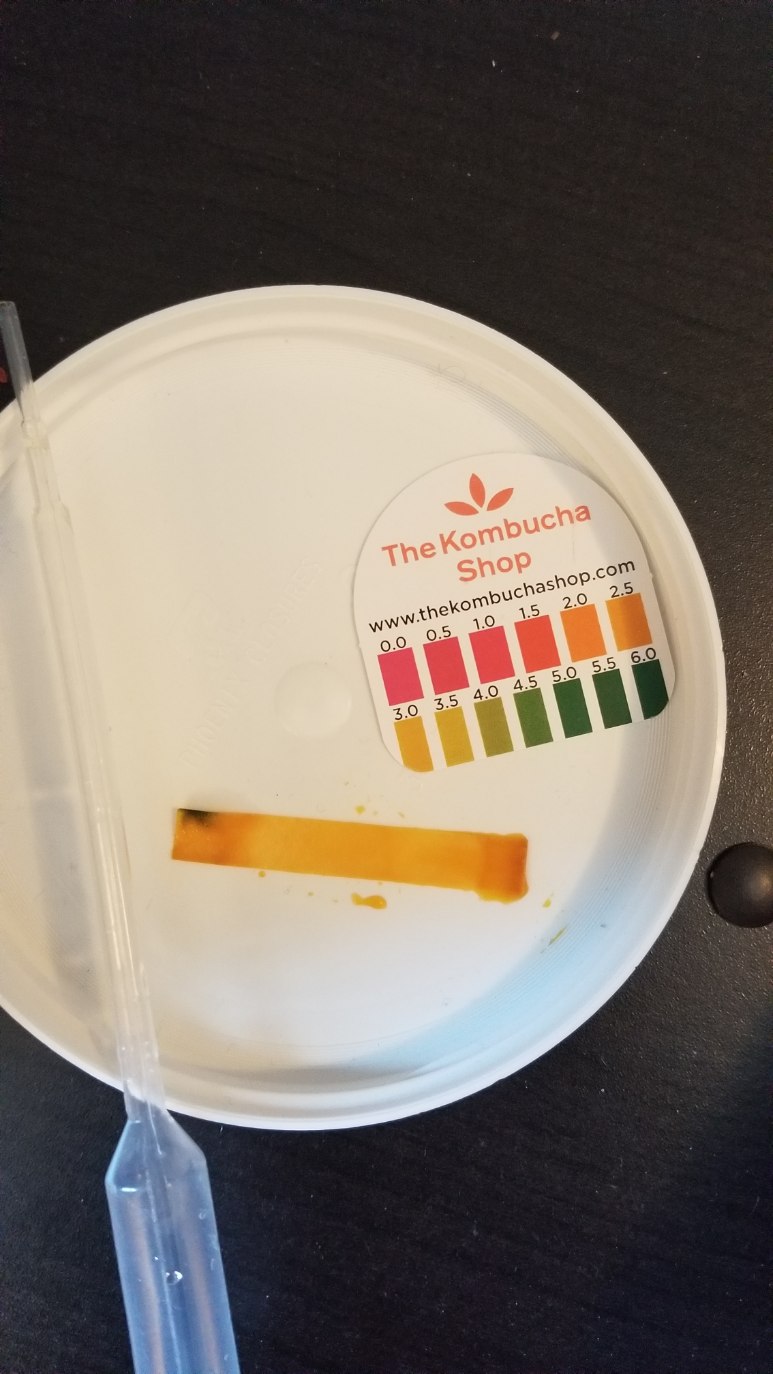 I did a mix of strawberry, blueberry, orange, and warm spices. There wasn't enough kombucha to fill the last bottle, so it wouldn't get properly carbonated, so I drank that bottle instead of letting go through a second fermentation. Verdict: delicious, even without second fermentation carbonation.

The second fermentation will go on between two and four days, and possibly longer if I want the kombucha to be more carbonated. However, after 4 days the bottles require burping, else they'll explode. The yeast is turning the sugars from the fruit into CO2, which is what causes the carbonation. 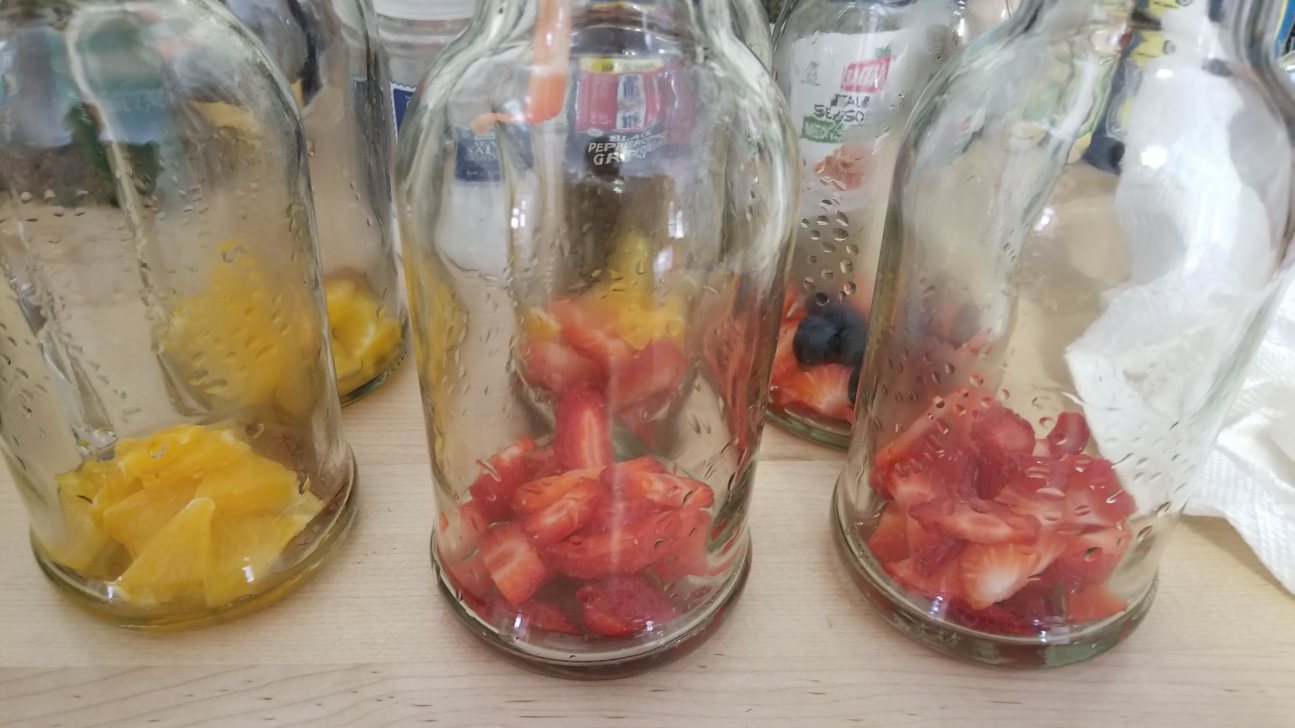 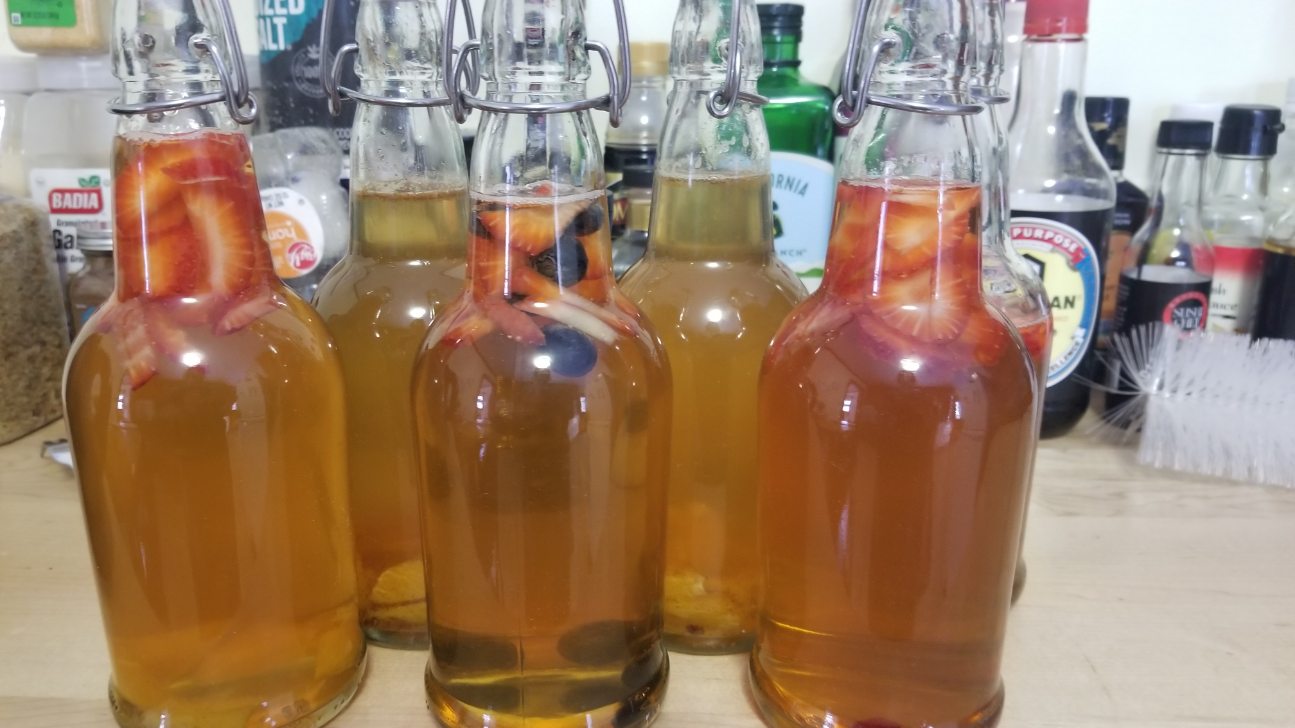 The kit said to leave 1-2 inches of space in each bottle. I didn't fill up one of the strawberry bottles all the way, so I drank that one early.

The second fermentation has finished, and I am ecstatic.

I tried the strawberry ones first and was bummed to see they weren't super carbonated. They were still super yummy, though. I put them in the fridge and then tried the orange ones... wow! Just look at that carbonation! I did that! Natural carbonation! The orange ones are way more carbonated because oranges have double the amount of sugar in them than strawberries. I'll know to supplement my strawberry kombucha with peaches or something like that in the future.
Anyways, this is the official end of my first kombucha brewing experience! 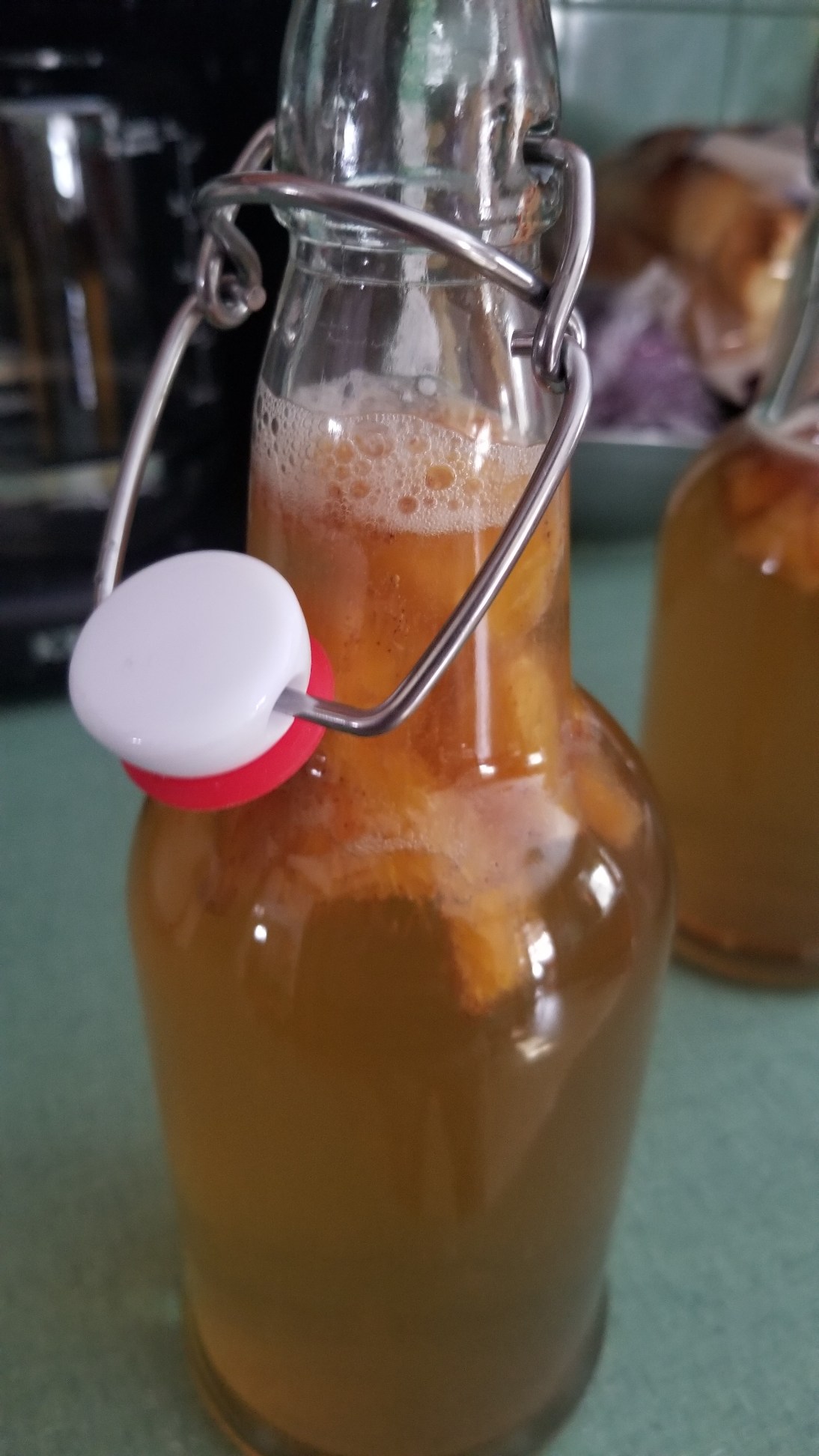 So much carbonation! Amazing! 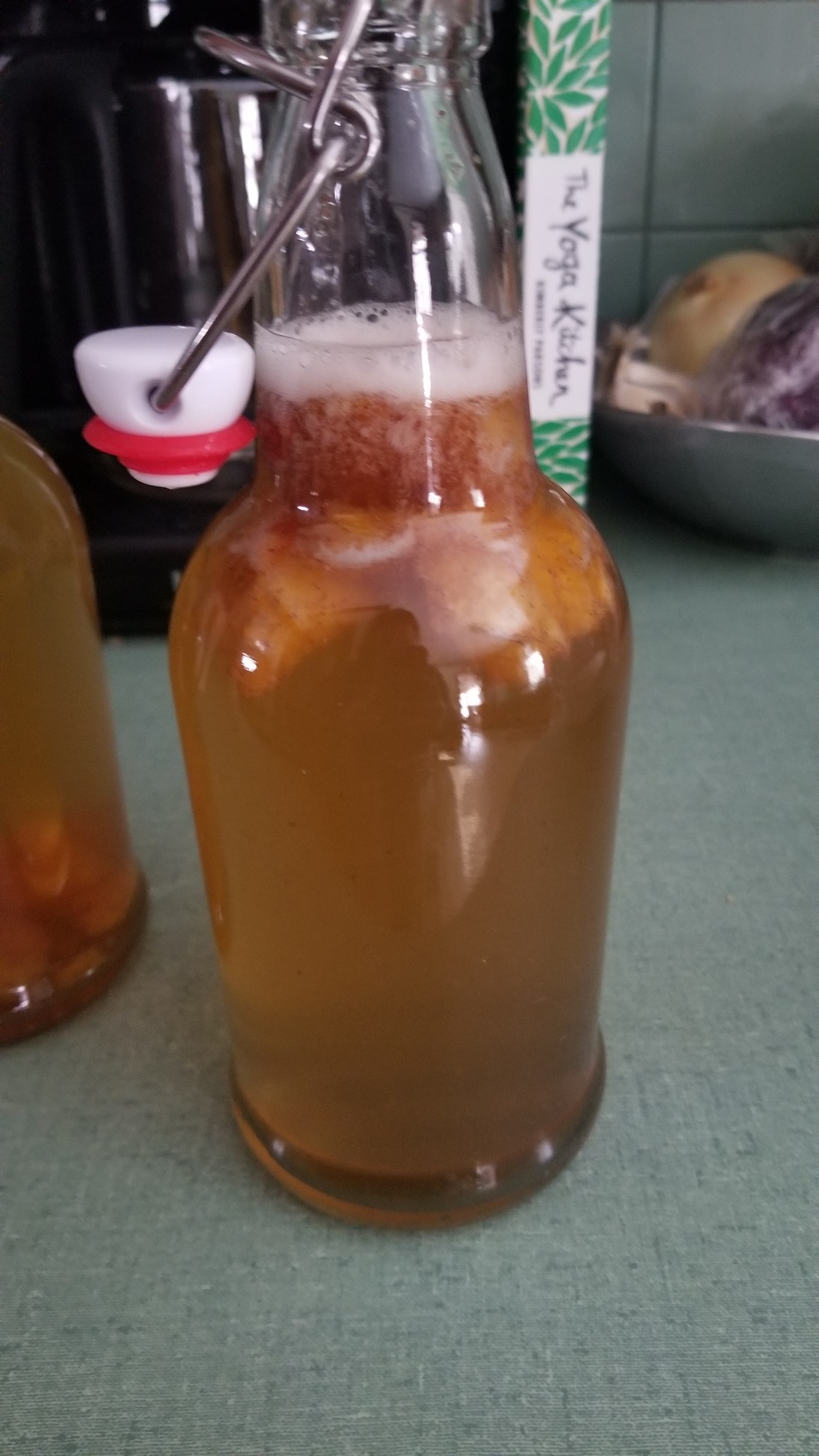 Can you see the little bubbles rising to the top? Yeah, amazing!
Excuse the poor quality video, but how amazing is that!!

P.S. the amount of times I've said "amazing" in this post makes me feel like I'm on The Bachelor.